How to Get Grace 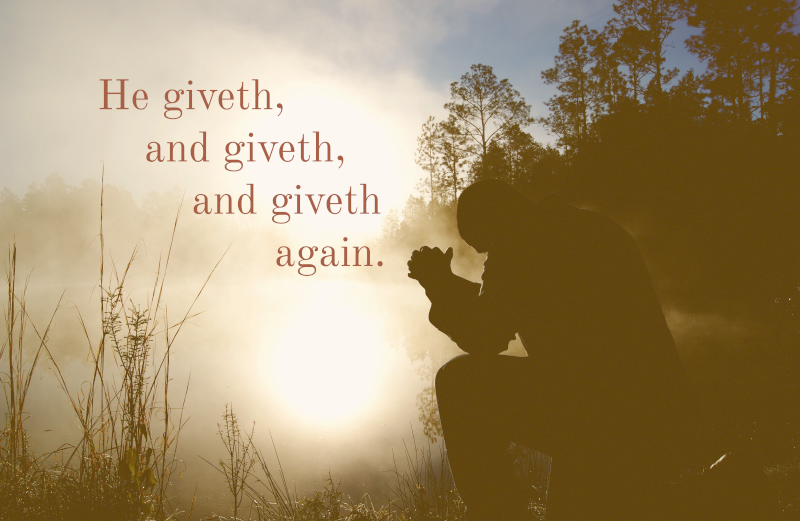 Thus far in this blog series on grace we have examined what grace is, where it begins, how it ought to impact our treatment of one another, and how it becomes the atmosphere in which we grow. We have also examined some of the important doctrinal questions surrounding grace, namely what it means to no longer be under the law but under grace, and how it relates to a legalistic mindset.

In today’s post, I want to discuss how to get grace. Now I realize that concept will immediately strike some of you wrong since, by definition, we cannot merit or earn grace. But just because grace cannot be merited does not mean that there is not a requirement that we must fulfill prior to obtaining grace. Fulfilling that requirement does not earn us grace, but it does make it possible for grace to come to us.

Salvation itself is an illustration of this. How are we saved? By grace is the automatic and correct answer. Yet, though, that grace is freely offered to every human being it is certain that not every human being has received it. How do we human beings obtain the grace of God for salvation? By faith. By whom also we have access by faith into this grace wherein we stand. (Romans 5:2) Faith is the hand that reaches up to Heaven to obtain the grace of God. Did we earn that grace by offering God faith? Of course not, rather we fulfilled the conditions necessary to obtain it. Faith is a requirement for salvation but that salvation is still entirely by grace. For by grace are ye saved through faith. (Ephesians 2:8)

As the children of God by faith in Jesus Christ we need His grace just as much now as we did while we were yet sinners. (Romans 5:8) We need the grace of God to enable us, to empower us, to help us to obey every command in the Bible: large or small. We must have His grace, not just for eternity, but for today. So how do we get it?

Grace comes free, but it does have one requirement – humility. Surely he scorneth the scorners: but he giveth grace unto the lowly. (Proverbs 3:34)

Some years ago, I did an intensive word study in Proverbs. Such a study might be a good blog series on its own, now that I think about it. In that study, I discovered that a scorner is a person driven by pride to reject instruction. He not only foolishly embraces his own opinion, but actively seeks to turn others around him likewise away from their instructors towards himself. In dealing with such a creature, God, as He often does, gives him a taste of his own medicine. God ignores the scorner’s opinion and instruction, actively seeks to undermine the scorner’s influence, and heaps upon him proud disdain in the meantime.

Look for a moment at the contrast in this passage from Proverbs. The scorner’s number one attribute is pride, yet the opposite of pride is humility. When a man embraces humility, not about a particular issue, but as a way of life, God, as a result, pours out the undeserved blessings of grace upon him. He giveth grace unto the lowly. ‘Lowly’ in the original language is rooted in the phrases to stoop, to be humbled, to be bowed down. The article ‘the’ which precedes it implies this is not just an isolated action on the part of a person, but rather a way of thinking and/or living. They do not act lowly on occasion; they actually are classified as ‘the lowly.’

For an example of what this looks like in real life I would point you unhesitatingly to Christ. The Old Testament prophet said to Israel, Behold, thy King cometh unto thee: he is just, and having salvation; lowly, and riding upon an ass, and upon a colt the foal of an ass. (Zechariah 9:9) Jesus Himself specified this as the correct term to describe Him when He said, Take my yoke upon you, and learn of me; for I am meek and lowly in heart. (Matthew 11.29) To quote one of my very first blog posts, “Jesus’ entire earthly career is marked by humility. We see it in the events of His birth. We see it in His chosen approach to life, first as a blue- collar laborer and then later as an itinerant, poverty-stricken rabbi. We see it in the events of His death, crucified like a criminal between two thieves and then placed in a borrowed tomb. In fact, God’s entire decision to offer redemption by presenting His own Son, in human flesh, to die for us, means He humbled Himself (Philippians 2:8). What did He leave? To what did He come? How did He arrive? How did He live? How was He treated? How did He die? There is humility in the answer to all of these questions. It is wrapped up in the very fabric of who Jesus is.”

Likewise, the man so often referred to as the greatest Christian to ever live, the Apostle Paul, lived a life marked by humility. “Wait a minute. Isn’t he the guy who boasted that he worked harder than everybody else, and that’s why God used him?” Yes, but he also surrounded that assertion by several references to humility. By the grace of God I am what I am: and his grace which was bestowed upon me was not in vain; but I laboured more abundantly than they all: yet not I, but the grace of God which was with me. (I Corinthians 15:10) He credits God for every one of his accomplishments, for the churches started, the men trained in ministry, the Scripture written, the influence of a life which almost single-handedly turned Christianity from being the religion of an isolated tribal sect to one that permeated every corner of the Roman Empire.

If God has used you to raise good children, if He has used you to bless hearts with music, if He has used you to win souls to Himself, if He has used you to teach someone the Scriptures, it is He that is doing the using. It is His grace in you that did it. When my first-generation Polish immigrant neighbor greeted me the other day in his broken English with the phrase, “Hello, my best neighbor” he paid me a compliment. But that compliment does not belong to me; it belongs to Him. It is His grace in me that produces anything good with my life. And the minute I lose that understanding is the minute God stops pouring more grace into my life. The Lord’s brother said it this way, He giveth more grace. Wherefore he saith, God resisteth the proud, but giveth grace unto the humble. (James 4:6)

Grace is amazing. It is wonderful in every sense of the word. No matter what additional superlatives I use to describe it they will fall short of its actual value. If grace contains so many matchless blessings then why would I not want as much of it as I can possibly get? I grow in it – so if I get more I can grow more. It enables me – so if I get more I can do more. If that is not enough, He loves to give it and has an inexhaustible store. Annie Flint penned an exquisite description of this when she wrote…

He giveth more grace as our burdens grow greater,
He sendeth more strength as our labors increase;
To added afflictions He addeth His mercy,
To multiplied trials He multiplies peace.

When we have exhausted our store of endurance,
When our strength has failed ere the day is half done,
When we reach the end of our hoarded resources
Our Father’s full giving is only begun.

…but what would stop me from getting more of that grace I so desperately need and so deeply desire? God resisteth the proud.

As I write this at my dining room table my youngest son, Sam, is sitting a few feet from me on the couch. He is busily engaged in his own pursuits. Several times this week he has stopped himself dead in his tracks, looked at me, and said, “Dad, it’s been a long time since we wrestled.” Of course, a long time for him is last week, but nevertheless, he delights in wrestling with his father. I am not sure why we call it wrestling, though. The truth is I am so much larger than him the contests are over before they begin. If he wants to move me somewhere there is no way he can if I am really resisting him.

You and I often seek to accomplish something, and good somethings at that. But if we are not making any headway it just may be that our pride is causing God to set His own omnipotent power in array against us, to resist even the good things we are seeking to accomplish. That last thing I need is God resisting me. What I really need is God enabling me, empowering me, pushing me forward. In other words, I need grace. What is the requirement? He giveth grace unto the humble.

I picture it like this: God has a great big tub of grace and a huge wooden spoon. There is a line of people waiting for Him to scoop some up and put it on their plate. But getting in that line is kind of like getting into the lines in the kiddie section of the amusement park – you have to be rather low to the ground.

Some ignorantly say, “Ah, that cruel, mean God is making us crawl to Him. Well, I’m better than that. I won’t crawl for anybody.” I say, “That wonderfully good God is just waiting to lavishly pour out on us His undeserved goodness, but He wants to make sure it isn’t wasted so He waits for humility to be evidenced first.”

We cannot merit grace. Perish the thought. But grace does have a requirement. Beloved, do you view Him as high and holy and lifted up, and yourself as a man of unclean lips? Then brace yourself. Grace is coming your way by the truck load.