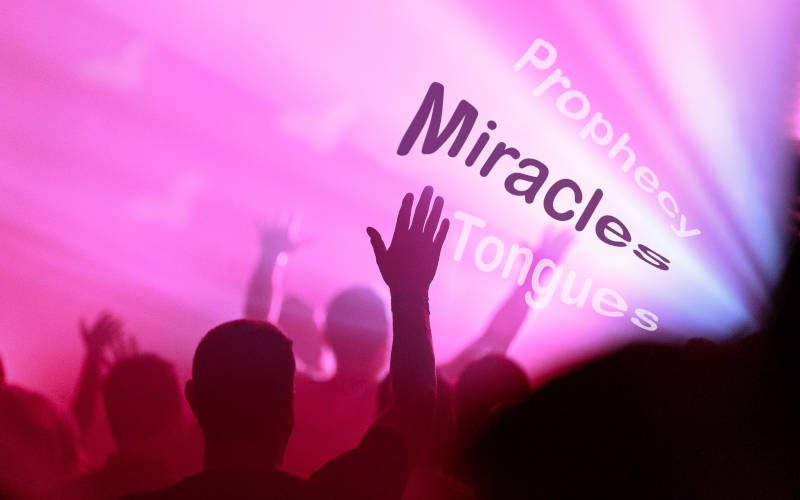 Does God speak through the sign gifts today? By sign gifts, we mean any miraculous gifts used in the New Testament for the purpose of authenticating a person or message as originating from God (e.g. Acts 14:3).  According to an increasing number of Christians, He does.

Tongues and the revelatory sign gifts first gained strong acceptance with Pentecostalism (First Wave) beginning in the late 19th-century, followed by the broader charismatic movement (Second Wave) in the late 1960’s.  Around 1980, a tempered form of the movement (Third Wave) has emerged and gained wide acceptance among evangelicals and even some who claim to be Baptists.  The distinctive marks of the movement are: 1) Less emphasis on tongues speaking than in earlier times; 2) Spirit baptism is placed at salvation rather than at a time following salvation; 3) The expectation of multiple fillings of the Spirit after salvation; 4) It promotes “signs and wonders,” i.e. there are no limits on the miraculous sign gifts today; 5) It is more ecumenical than traditional Pentecostalism.1  All three waves of the charismatic movement have been predicated on the idea of spiritual restoration.  It was new, fresh, and radical.  For example, Peter Wagner, who was at the forefront of the Third Wave held that international church organizations such as Vineyard were “more in tune with God’s plan and at the ‘cutting edge’ of what God was supposed to be doing at the end of the second millennium.”2 In other words, Christianity had grown tired, dull, and increasingly irrelevant, so God sent a refreshing wave of charismatic gifts to restore and reinvigorate the church.  The emphasis is on subjective, experiential phenomena.

In recent years, several high-profile evangelical theologians have embraced the present use of charismatic gifts.  They have written and spoken extensively on the topic from a biblical point of view, thereby giving the movement an air of legitimacy among students of Scripture who respect their views on a range of issues.  They hold to inerrancy and a closed canon of Scripture, and even caution against the misuse of the gifts.  But at the same time they promote and defend the gifts.  Their position has been called “open but cautious.”3 This “open but cautious” view smacks of post-modern relativism.  The idea is, “I do not personally possess any sign gifts and I may have never seen their legitimate use, but I don’t want to deny they exist out there somewhere.”  This cautious view is comfortable, but with an edge of excitement.  And it appears to be gaining ground today.  The charismatic movement once considered fringe is starting to look mainstream.

But if all of this is true, if God still speaks through modern prophets and tongue speakers, the doctrine of sola scriptura and hence the entire Baptist faith is called into question.  Sola scriptura is the doctrine that Scripture alone is authoritative in the life of faith.  For Baptists, this doctrine is the first and primary doctrine from which all others are derived.  As we have stated previously, “To recognize the Bible as the sole source of authority is the first distinctive of a Baptist. To deny the all-sufficiency of Scripture is to cease to be a Baptist.”  Therefore, the idea of a charismatic Baptist (“Bapticostal”) is an oxymoron.  Scripture alone is inspired and therefore authoritative (2 Timothy 3:16).  Acceptance of the sign gifts is an open door to continuing revelation and a subtle attack on Scripture as our sole authority.  It leaves skeptics seeking signs and miracles from God.  It leads believers to seek a closer relationship with Christ through subjective means or to look beyond Scripture for relevant answers to life’s modern problems.  It shifts the focus away from Scripture to the fallible word of men, the realm where lurks every false doctrine and lie of Satan.

The Key is Apostolic Authority

The all-important question is, who speaks for God?  Is it only the writers of Scripture, or is it also the person sitting next to you in the pew who has a prophetic word just for you?  Was it the sincere man who came up to me recently in a café and said he had a message and word of blessing for me from God?  Scripture teaches that authority for New Testament revelation was given to the first century apostles (see e.g. Acts 2:42).  And since that time, the unified voice of orthodox Christianity down through the centuries has affirmed the same. Apostolic authority is a deadbolt on the door of the canon.  Consider a few key passages:

Therefore we ought to give the more earnest heed to the things which we have heard, lest at any time we should let them slip. For if the word spoken by angels was stedfast, and every transgression and disobedience received a just recompence of reward; how shall we escape, if we neglect so great salvation; which at the first began to be spoken by the Lord, and was confirmed unto us by them that heard him; God also bearing them witness, both with signs and wonders, and with divers miracles, and gifts of the Holy Ghost, according to his own will?

In prior dispensations, God revealed Himself in various ways, including angels, to the prophets.  All of that led up to His ultimate self-revelation in Jesus Christ (Heb. 1:1-2).  Jesus did not personally record any revelation, but orally passed on His revelation to the apostles (“those who heard him”).  They, in turn, passed the revelation on to the writer of Hebrews and his audience.  We find then three generations of hearers: 1) Old Testament prophets heard the angels; 2) Apostles heard Christ; 3) Everyone after heard the apostles, whose message was confirmed to them with “signs and wonders, and with divers miracles, and gifts of the Holy Ghost.”  The implication is that divine revelation and the confirming sign gifts ended with the apostles.4

Truly the signs of an apostle were wrought among you in all patience, in signs, and wonders, and mighty deeds.

The Corinthians could be assured of Paul’s apostleship because of the authenticating signs he performed.  The miraculous signs are tied to the apostolic office, which would vanish after the first century.

Beloved, when I gave all diligence to write unto you of the common salvation, it was needful for me to write unto you, and exhort you that ye should earnestly contend for the faith which was once delivered unto the saints.

Jude is writing to Christians who were subtly infiltrated by false teachers who had counterfeited the gospel.  The need of the hour was to do battle for “the faith.”  The context of the verse indicates that this faith is the traditional body of doctrine.  It is something to be remembered (see Jude 5, 17).  This faith was “once delivered” in the sense of “complete,” “absolute,” and “all-sufficient.”  This finality of revelation casts a dark cloud over the need for additional revelation through the sign gifts for the building up of the body of Christ.

The Lord’s sheep follow Him and hear His voice.  One solid theological reason for holding to a closed canon of Scripture today is that the Lord’s people have uniformly heard His voice when it comes to the 66 books of the Bible.  They have unanimously tied revelation of the New Testament to the apostolic office.  Never has the canon been seriously questioned since the fourth century.  There is no such unanimity on the issue of tongues and prophecies.  In fact there are gaping divides.  The vast majority of orthodox Christianity down through the centuries and a large portion continuing today have not heard God’s voice when it comes to the sign gifts.  The grossly uneven distribution of tongues across Christian churches today appears to be at odds with the body model of spiritual gifts set forth by Paul in 1 Corinthians 12.  At least on the surface these inconsistencies tend to set the sign gifts apart from how other spiritual gifts appear to be functioning today.

According to 2 Peter 1:2-3, everything we need to live a godly life is given to us in the knowledge of Jesus Christ.  There is nothing more we need outside of the knowledge of Him.  The case briefly outlined above has shown that knowledge of Christ comes only through the testimony of the apostles who walked and talked with Him.  Jesus commanded the apostles in the Great Commission to make disciples and teach them to “observe all things whatsoever I have commanded you.”  The only way for us to truly know Christ is to receive His revelation from those who spent time with Him, learned of Him, and were commissioned by Him to lay the foundation for the church age (Eph. 2:20).  At least the Apostle John thought so (1 John 1:2-3).  Whatever force is behind the modern charismatic movement, it cannot speak direct revelation from God as claimed and therefore cannot be of God.  We are not to be afraid of it (Deut. 18:22).  Rather we are to earnestly contend for the faith which was once delivered.