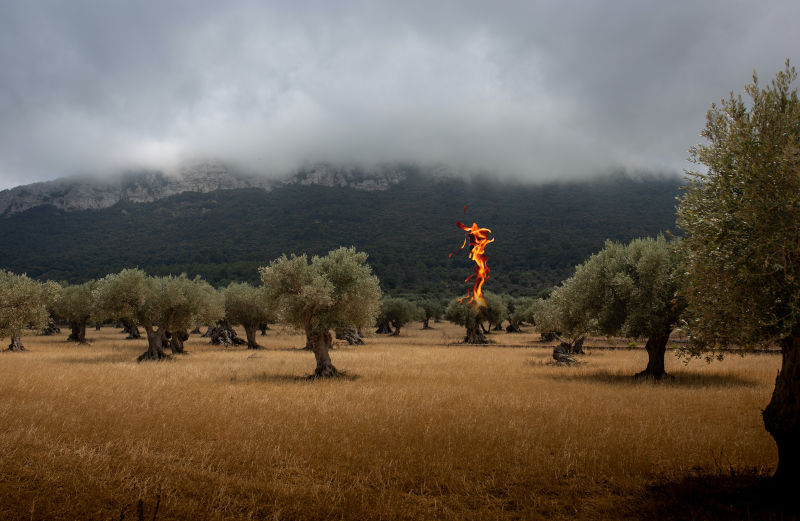 “And the angel of the LORD appeared unto him in a flame of fire out of the midst of a bush” (Exodus 3:2).

This message, however, concerns a different aspect of testifying, witnessing / soulwinning.  It concerns the work of the saints in their familiar settings, in their spheres of influence where they have day-to-day, year-by-year influence.  Christ cited the burning bush in his unassailable answer to the Sadducees regarding the resurrection, and Stephen mentioned the burning bush in his monumental message to the Libertines before the high priest.  This portion of Exodus presents a bush that communicates valuable lessons for any child of God.

The Burning Bush Believer is Not Consumed in God’s Fire

“…and, behold, the bush burned with fire, and the bush was not consumed” (Exodus 3:2).  In the Upper Room Discourse on the last night of his earthly life, Jesus Christ gave his apostles a reality check for the remainder of their earthly sojourns.  He told them that they would be hated by the world, and that they would suffer tribulation in this world (John 15:19; 16:33).  Upon their return to Lystra (where Paul was stoned) and Iconium, both Paul and Barnabas exhorted the new believers to remain steadfast in their faith even though they would not ultimately enter the kingdom of God without the suffering of difficult tribulations (Acts 14:22).  At the end of his earthly ministry, Peter wrote an entire epistle in which he detailed the fiery trials of believers (I Peter 1:7; 4:12) and gave Scriptural and spiritual instruction as to a godly response.

These fires from God−persecution, purging, and proving−are designed to burn off the dross and leave a cleaner vessel (Proverbs 25:4).  Our loving and all-wise Father does not intend to burn his believers to ashes, but he does burn from off their surfaces the rust and corrosion of contact with this world and the grime of corruption of this flesh.  Peter and Paul both indicate that such fires are the means by which the children of God enter the fellowship of Christ’s sufferings (Philippians 3:10; I Peter 4:13).  This is never co-redemptive in nature.  It is, rather, productive of deeper communion with our Saviour than many wish to pursue.

Burning bush believers fall seven times and rise again.  They find the delicate balance between having continual sorrow in their hearts and rejoicing in the Lord.  They experience what looks like failure and walk in victory.  They believe God when their version of Job’s friends condemn them for their five percent fault when they clearly have ninety-five percent righteousness.  Like Elijah, they stand in the cave mouth and listen for the still, small voice; then they go back to work for their worthy Saviour.  Like Jeremiah, they are lifted up from the murky dungeon by some unsung Ethiopian eunuch, and they still preach the truth that put them into the dungeon in the first place.  Like Aquila and Priscilla, they lay down their own necks, and as soon as they are free of the guillotine, they help the preachers and the churches again.

Perhaps this coronavirus scourge will steel the souls of the church again so that believers are less prone to complaint for little inconveniences and more ready for praise for little blessings!  May the Holy Spirit fill his people once again and revive his church once again so that we count it joy when we encounter God’s fires, so that we rejoice when we are counted worthy to suffer shame for his name, so that we commit the keeping of our souls to Christ because he is a faithful Creator and Saviour.

May our Lord Jesus Christ so live through his children once again that they have a Romans 5:3-5 testimony whereby their tribulations produce patience that develops into the experience that God comes through every time.  May that continue such that the experiences of God’s coming through bring hope that he will come through again.  May we be that generation of saints who are not ashamed of the testimony of our Lord nor of his saints in difficulty.  May we be that priesthood of believers who are partakers of the afflictions of the gospel.  May we be that holy nation of God’s children who will show forth his praises and suffer all things to bring others to Jesus.  In this manner will we show the love of God shed abroad in our hearts.

“And Moses said, I will now turn aside, and see this great sight, why the bush is not burnt” (Exodus 3:3).  Believers are to be visible to the world.  Listen to Jesus tell his disciples, “A city that is set on a hill cannot be hid” (Matthew 5:14).  Listen again as Paul exhorts the Philippians to be “blameless and harmless, the sons of God, without rebuke, in the midst of a crooked and perverse nation, among whom ye shine as lights in the world” (Philippians 2:15).  Listen a third time as Peter admonished scattered strangers to have an honest conversation in the world so that those slandering them might by their “good works, which they shall behold, glorify God in the day of visitation” (I Peter 2:12).

The Burning Bush Believer Becomes a Source of God’s Voice

The bush itself did not speak, but God spoke out of that bush:  “God called to him out of the midst of the bush.” God had a message for Moses, and he spoke it out of the center of a bush.  While some of our modern culture has neither interest in nor inclination toward God’s voice or message, there are still some Ethiopian eunuchs and Sergius Pauluses who desire the truth.  They are actually seeking for answers to their questions, solutions to their problems, and peace for their turmoil.  They travel through society, noticing the conformity until it is blurred out of consciousness.  Then suddenly, they observe a bush that is not burned in the fires of God’s testing, and they turn aside to see it.

That burning bush believer is not inspired as were the Bible writers, but he is a source of God’s voice.  If the one turning aside to see is lost, that burning bush believer has the gospel message.  God’s voice to that needy sinner is that he is a hopelessly condemned sinner who must confess his sins, repent, and believe that Christ paid all the price of sin with his blood.  That gospel message is made ten times more relevant and meaningful when the sinner in question has observed that the gospel messenger has not been consumed in the fires of life and has not conformed to the cultural blah of the day.  That burning bush believer has the “upper hand” as it were, because his life not only speaks a message but shows it.

That burning bush believer is also a source of God’s voice if the one turning aside to see is saved but needing discipleship, help, wisdom, comfort, or any other of a long list of needs for growth.  God’s voice from that burning bush believer is a principle of life for discipleship, a correction in habit for help, a proverb of truth for wisdom, a promise of God for comfort, etc.  That biblical message is made ten times more relevant and meaningful when that seeking saint in question has observed that burning bush believer, and has seen that he has not been consumed in the fires God has allowed and has not conformed to the norm the world has embraced.

God’s children are to be heard.  Their voices are to be publishing, proclaiming voices.  John the Baptist was a voice in the wilderness.  Isaiah the prophet was a trumpet voice lifted up to communicate to his generation.  Nahum spoke of those using their voices to publish peace upon the mountains.  Paul spoke of the necessity of preaching, adding that there was a woe upon him if he did not preach.

The Burning Bush Believer Sends Listeners Into God’s Will

Doubtless, many hear but do not listen.  Moses heard, and even though a lengthy conversation with interspersed objections ensued, Moses listened and obeyed.  God was credible to Moses because the bush did not burn.  God was powerful to Moses because the message matched what he saw.  The message of the gospel to unsaved people and the message of truth to saved people will be credible when its messenger makes God both visible and audible.

Just as spontaneous testimony is part of the believer’s life, so is the business of burning bush testifying / witnessing / soulwinning.  Life is replete with situations of prolonged contact with those in one’s sphere of influence, and it is those who will notice the bush that is not burned.  When someone preaches Christ but does not show him, people cannot see Christ.  When someone lives for Jesus but does not speak for him, people cannot hear Christ.  Either way, they go on to earthly, and sometimes eternal, consequence without the truth.

May this editor urge upon you, Dear Reader, the responsibility each of us has to be a burning bush believer.  Somebody out there will turn aside to see.

Dear pastor, God gave the opportunity
to reading your article. It has been a great blessing in my life. I am from India my father is a pastor, please pray and support our ministries.