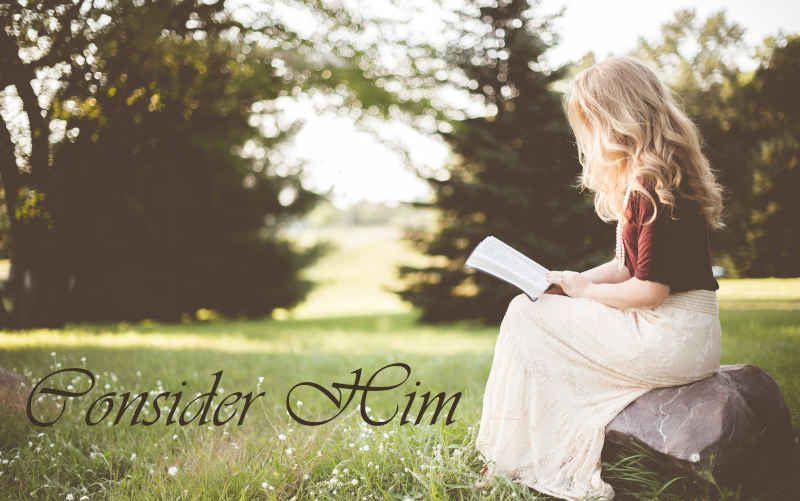 “…consider the Apostle and High Priest of our profession, Christ Jesus” “Now consider how great this man was…” “For consider him that endured such contradiction of sinners against himself…”
Hebrews 3:1; 7:4; 12:3

The cited word consider means “to observe fully, to contemplate, to draw analogy or conclusion, to participate as a spectator.” To consider Jesus Christ, then, one gives him meditative thought as opposed to mere casual or passing thought. Three times in Hebrews, believers are commanded to consider our Lord. Each time, the focus is upon a unique aspect of our Saviour’s holy character.

Consider Jesus Christ in His Fullness

The third chapter of Hebrews opens with a comparison of the faithfulness of Moses with the faithfulness of “the Apostle and High Priest of our profession, Christ Jesus.” Moses was commended as faithful as a servant in his house, but Christ is honored as faithful as the son over the house. God counted Moses worthy of some glory, and showed Moses his back parts as he passed by Moses in the cleft of the rock. However, the Father counted his Son worthy of more glory than Moses. “(…And we beheld his glory, the glory as of the only begotten of the Father), full of grace and truth” (John 1:14).

Believers in this context are admonished to consider the faithfulness of Christ so that they will not harden their hearts and forfeit the glorious rest described in v.7-11. At every step of the way, individuals in God’s family are either hearkening or hardening. There is no middle ground. In the days of temptation in the wilderness, the fathers of Israel hardened their hearts. For lack of considering Christ, they failed to enter into, or experience, rest. Long and focused consideration of Christ’s brings life to the promised rest. Salvation rest is given. Discipleship rest is found or discovered by those who consider him.

Next, God’s children are urged to consider this faithful Christ so that they will not depart through unbelief from the living God (v.7, 12, 13). Again, the Spirit mentions the hardening that comes through the deceitfulness of sin. This is not departing in the sense of loss of salvation; such is impossible. This is departure in the sense of unbelief regarding God’s promises to his children. When one stops to meditatively think about the faithfulness of Christ, he has holy unction and motivation to remain steadfast through faith. Sin’s deceptions become weaker when one is considering Christ’s faithfulness. The devil’s enticements become far less reasonable as one considers Christ’s faithfulness.

Again, the saints are called upon to consider Christ in his model of faithfulness so that they can partake of Christ (v.6, 14, 15). We are his house “if we hold fast the confidence and the rejoicing of the hope firm unto the end.” Furthermore, “we are made partakers of Christ, if we hold the beginning of our confidence stedfast unto the end.” These are not verses about the way to be saved but are verses to those already saved. It is quite possible—and sadly quite common—for believers who partake of Christ for eternal life to neglect to partake of Christ for earthly life. Like Jacob of old, they pass over the Jordans of life with their own staffs. Equally like Jacob of old, they need an angelic wrestling match of considering Christ as it were, to lay back hold of the confidence they have “cast away” (Hebrews 10:35). The God who is good for his eternal promises is equally good for his earthly promises.

Consider Jesus Christ in His Worthiness

The next reference of considering Christ in Hebrews concerns his worthy nature: “Now consider how great this man was, unto whom even the patriarch Abraham gave the tenth of the spoils. Abraham, the father of faith, was a venerable soul, but consider the worthiness of Melchisedec / Christ that one as noble as Abraham would tithe to him.

Avowing the worthiness of Christ is clearing a stating of the obvious! An innumerable multitude in Revelation will sing, “Worthy is the Lamb that was slain!” Being that he is unchanging, that future worthiness can be no less now.

First, consider his worthiness in that he is unutterably superior and unequalled. Isaiah wrote of our matchless worthy Saviour, saying, “…there is no God else beside me; a just God and a Saviour; there is none beside me” (45:21). Hebrews 6:16 and 7:7 address the matter of men swearing oaths by one greater than they along with the matter of greater men blessing lesser men. Melchisedec (Christ) the greater and Abraham the lesser are the two personages in the text. As great as Abraham was, he was no match or equal of Melchisedec.

Second, the worthiness of Christ that deserves our consideration includes the fact that he is impeccably truthful and cannot lie. Hebrews 6:18 mentions “two immutable things,” (his promise and his oath) “in which it was impossible for God to lie.” Our great Jehovah / Jesus is named the God of truth in Deuteronomy 32:4; Psalm 31:5; and Isaiah 65:16. Paul wrote to Titus of the “God, that cannot lie” (1:2). Everywhere and in all contexts, Jesus Christ is honest, just, true, and trustworthy. He clearly is “the truth” (John 14:6).

Again, consider the worthiness of Christ in the aspect of his being immutably eternal and undying. Hebrews 7:16 and 24 speak of his endless life and his continuance in an unchangeable, unending priesthood. “Christ, being raised from the dead dieth no more; death hath no more dominion over him. For in that he died, he died unto sin once: but in that he liveth, he liveth unto God” (Romans 6:9, 10). The worthiest of men eventually die. Not our great Saviour. He lives, and lives forever. Consider this!

Fourth and finally, the church ought to consider the worthiness Christ in that he is indescribably powerful and unfailing. Hebrews 7:18, 22, and 25 contrast the unprofitable failing priests of the order of Levi under Aaron with the profitable never-failing great high priest Jesus Christ of the order of Melchisedec. His power and unfailing nature are nowhere more manifest than in the power and availing nature of his blood shed for sin. When the priests shed the blood of sacrificial animals, they merely pictured the Lamb of God who would take the sin of the world. It was “not possible that that blood of bulls and goats should take away sins” (Hebrews 10:4); but it is both possible and absolutely true that “the blood of Jesus Christ his Son cleanseth us from all sin” (I John 1:7).

Consider Jesus Christ in His Righteousness

Along this line, we ought to consider Christ’s righteousness because he was tempted but never sinned. He never engaged in a sin. He never committed a sin. He never entertained a sinful thought. Peter wrote of him, “who did no sin” (I Peter 2:22). Paul agreed when he stated that Christ “suffered being tempted” and “was in all points tempted like as we are, yet without sin” (Hebrews 2:18; 4:15).

Also along this vein, consider the righteousness of Christ in that he became sin but never sinned. Paul wrote in II Corinthians 5:21, “For he hath made him to be sin for us, who knew no sin; that we might be made the righteousness of God in him.” John wrote, “in him is no sin” (I John 3:5). Part of the warp and woof of the doctrine of Christ is his sinlessness. Part of that warp and woof is also that he became sin for us. The miracle of redemption includes the fact that Christ, in being the sacrifice for sin, never actually sinned but retained and maintained righteousness.

Hebrews 12:3 states that believers ought to consider this aspect of Christ so that they do not become wearied and faint in their encounters with temptation and sin. Were our Saviour even a little bit sinful, man would justify greater and greater degrees of sin in his own life. Being sinless both as sacrifice and as Saviour gives man a person of consideration who will prompt holiness and righteousness.

The fourth verse in Hebrews that employs the word consider is 10:24: “And let us consider one another to provoke unto love and to good works.” Having considered Christ in his faithfulness, his worthiness, and his righteousness, each believer ought then provoke his brothers and sisters in Christ to such good works as would come under the categories of faithfulness, worthiness, and righteousness. 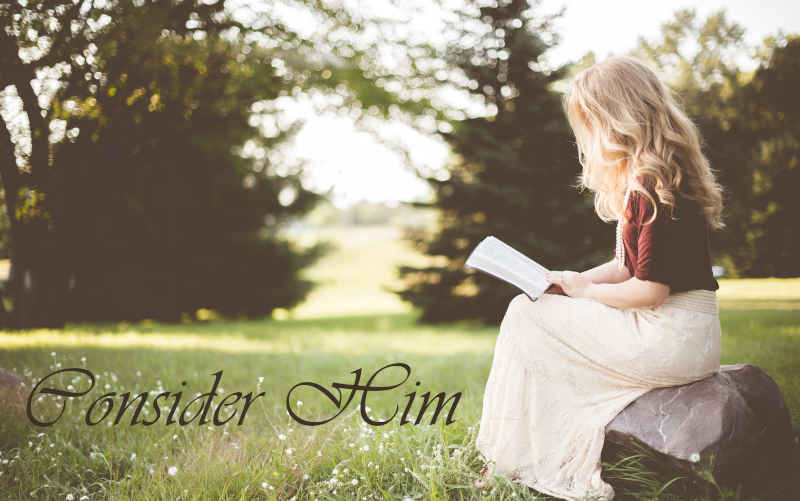